Krakow sausage The trouble was worth it 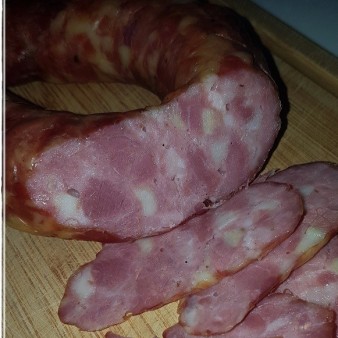 A general note. If you want to get a real sausage, as it should be, then don't skimp on the products. Otherwise it won't taste good and you'll waste a lot of time. Classical Gost semi-smoked sausage highest grade, which is Krakovskaya, is prepared from a mixture of ground beef of the highest grade, fat and pork, with the addition of finely chopped garlic, black and sweet peppers. Produced only in natural casing. So. Beef. Naturally, the meat, of course, of the highest quality. First you wash it, then you dry it and cut it in one and a half centimeters cubes. And then put it in the freezer... it's better to let it cool down. Take 30% lean beef. 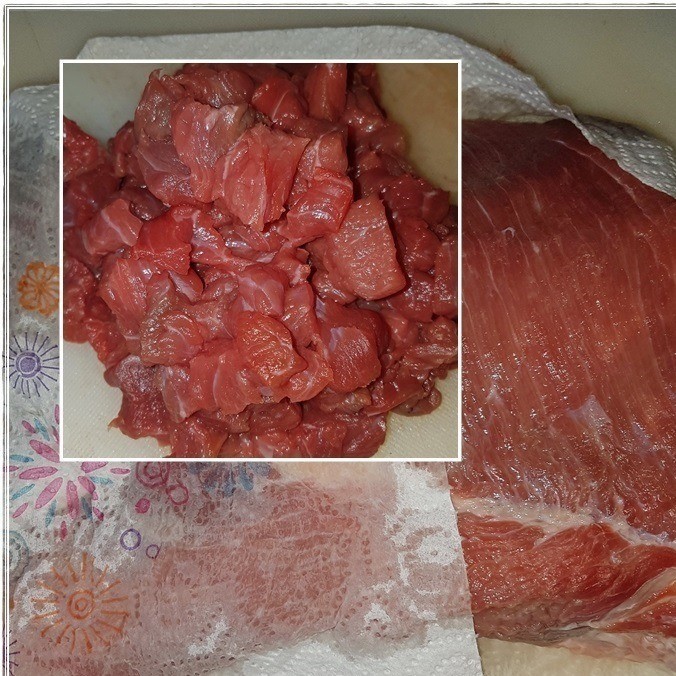 Pork. Pork will be put through a meat grinder, so cut it into pieces that are convenient for processing. Bones, of course, do not count, we remove them. And immediately put it in the freezer. Take pork: lean 30%, fat 20%. 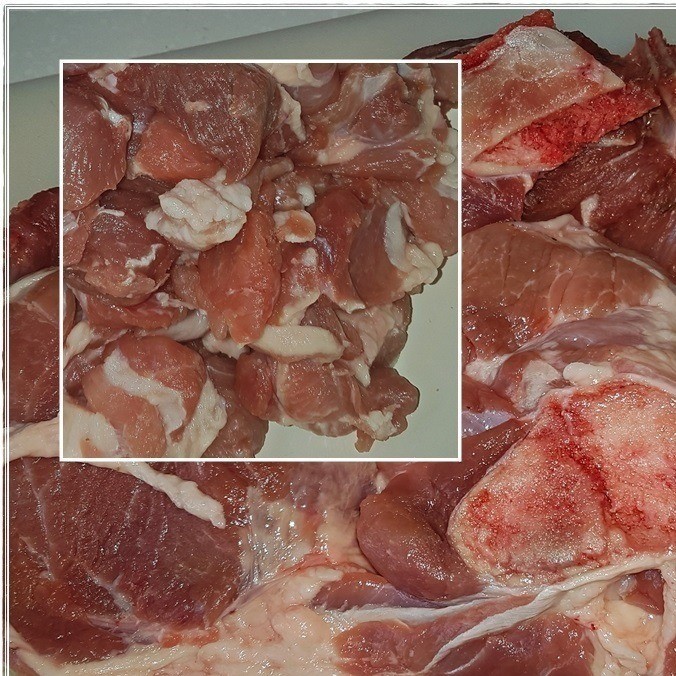 Real Krakow, who still remembers it, has these large flecks of fat in it. The best thing to use here is a pork brisket. I didn't have as much as the recipe called for, so I took out a piece of lard. Garlic, of course, did not go in the sausage, skin too, and the rest I cut into small cubes. And, given that the lard is salty (what else is there, if it is with garlic, etc.?), I did not salt this part of the stuffing. That is, I subtracted the weight of the stuffing from the weight of the salt. That's all there is to it. And, if we go back to the requirements of GOST, we need 20% of backbone fat. 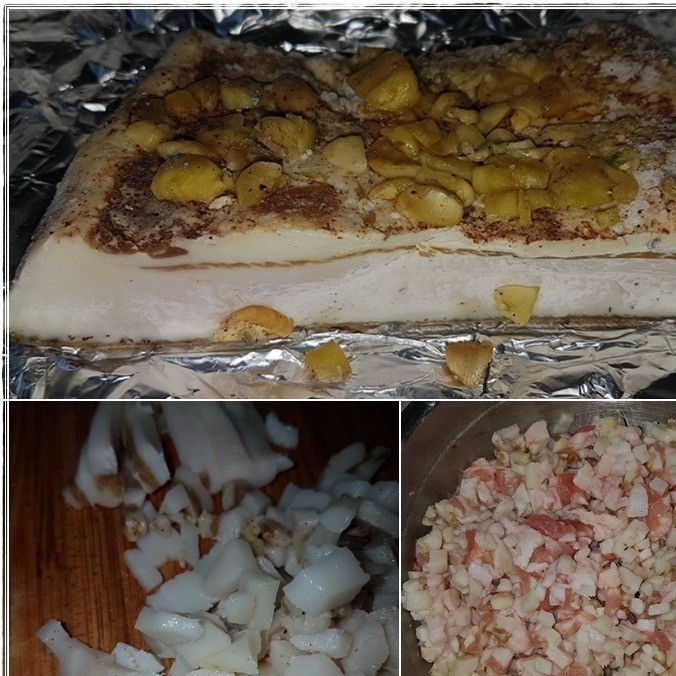 What else needs to be prepared? Water. It is better to have crushed ice, even - 10 percent of the meat raw material. It doesn't take long to prepare. Salt. It is recommended to take 2% of the total weight of raw meat. Half and half - nitrite and regular. But I, given the "lard factor" took nitrite 1% and table salt 0.8% (although I always do so). Other stuff: Sugar - 1% of raw weight, black pepper and allspice - 0.8% of raw weight, dried garlic 1% of raw weight (but I took a third of this recommendation, even less - here you can orient on your taste). And a little bit of nutmeg, cardamom and coriander.

I added all the salt, according to Pavel Kolbaskin's recommendations, to the lean part of the stuffing. I do not know, maybe it is a shamanism, but in the end, the sausage was not worse. I stirred it well and put it back in the fridge. 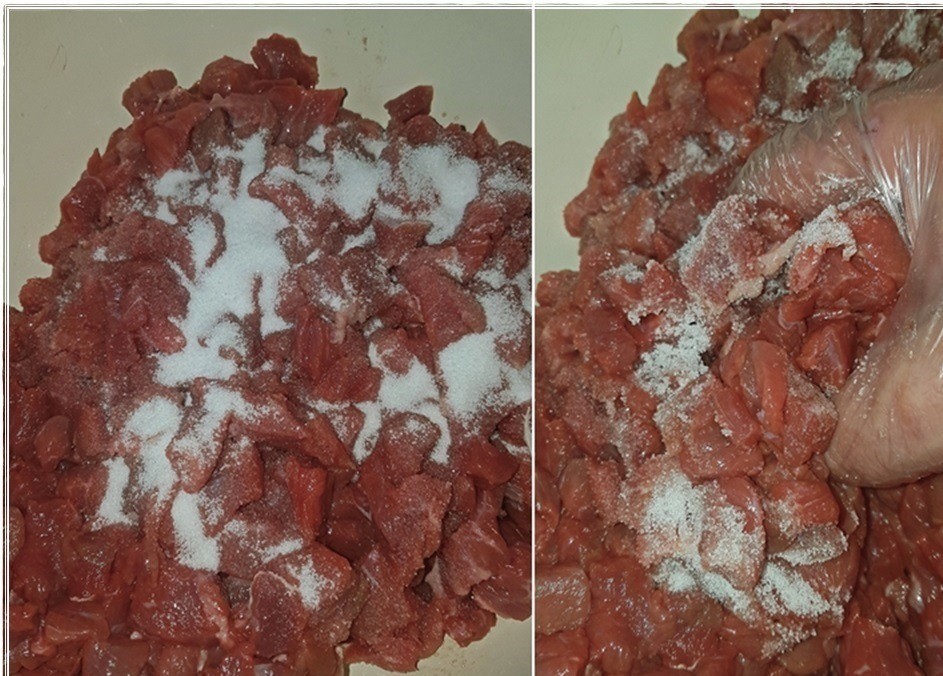 And then, by the way, taking the same advice from Paul, I added sugar, garlic, pepper, etc. to the beef and mixed it well. 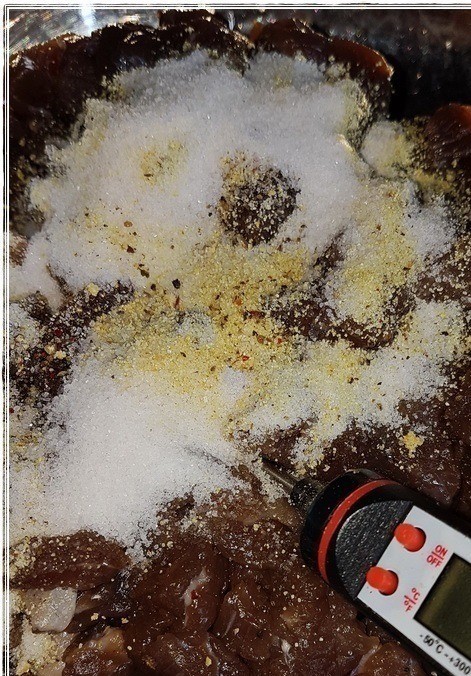 We take out the pork. It is worth remembering the rule to be guided in the preparation of sausage. The temperature of raw material for minced meat should not exceed 12 degrees. Less - you can, more - is not necessary. Here it is pork. 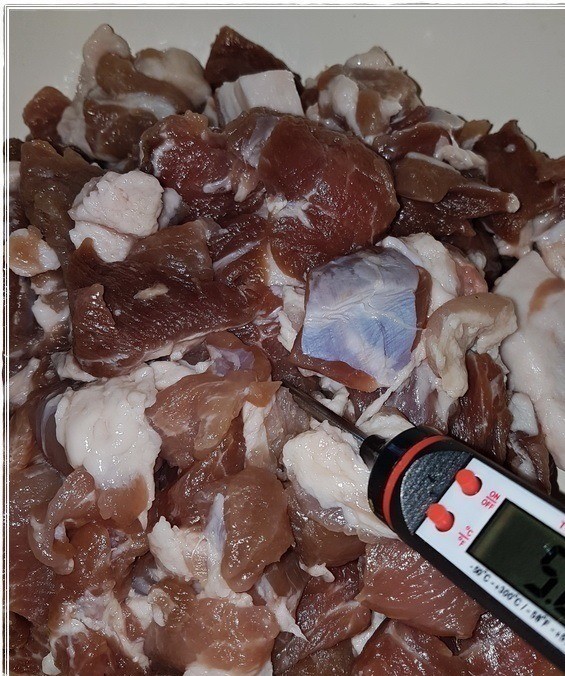 And shredded it through a coarse grate. 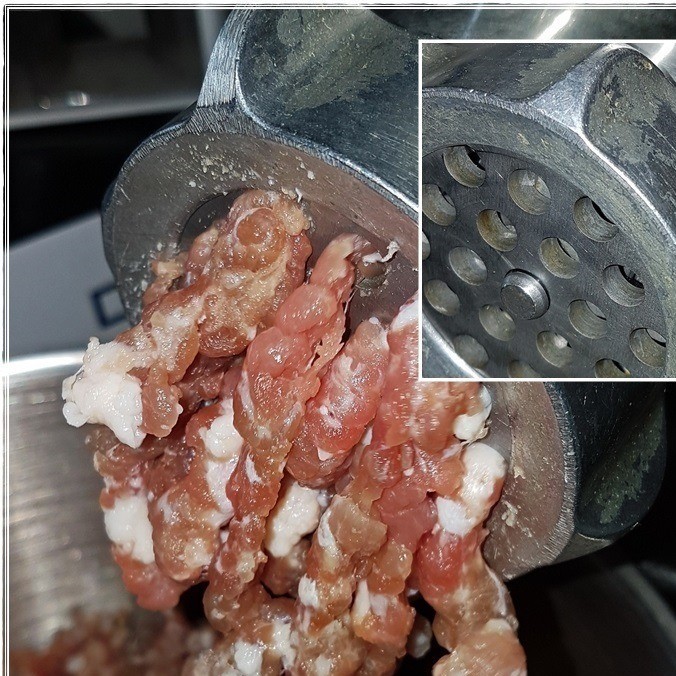 While the pork was twisting through the knives - grates, you see, its temperature rose. And the fat, on the contrary, had time to practically freeze. 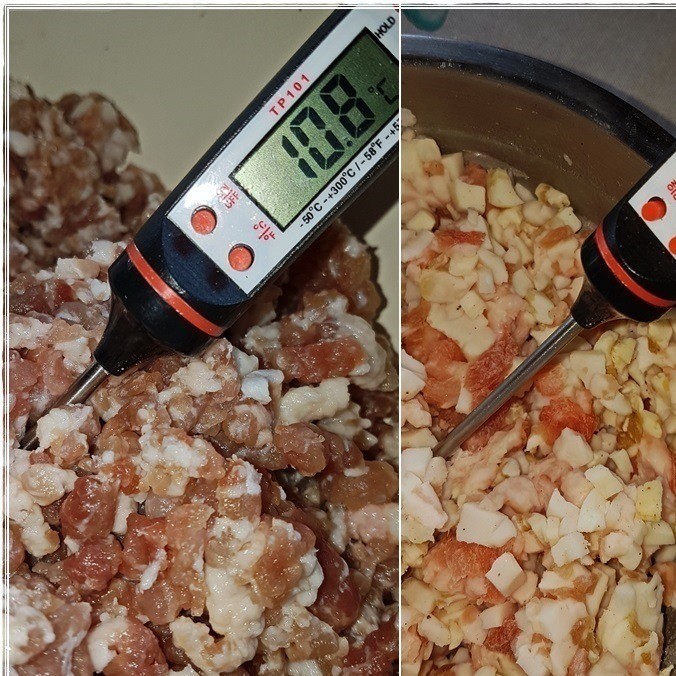 Here we go. All the stuffing components are "assembled". I confess that I reduced the amount of lard. Almost halved it. I felt like it. 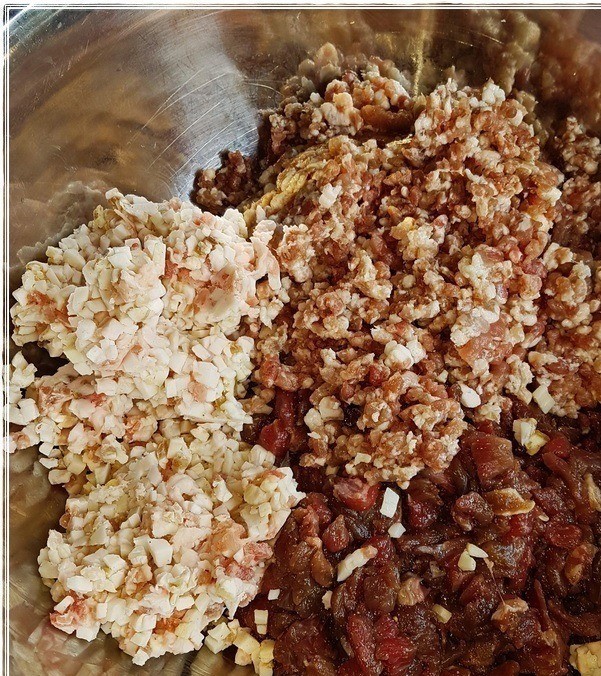 And kneaded very well. I added water and ice. But the temperature went up a bit, which, however...

... did not interfere with the quality emulsification of the stuffing. And I put the minced meat in the fridge, closer to the freezer and the back wall. Let it mature, age. 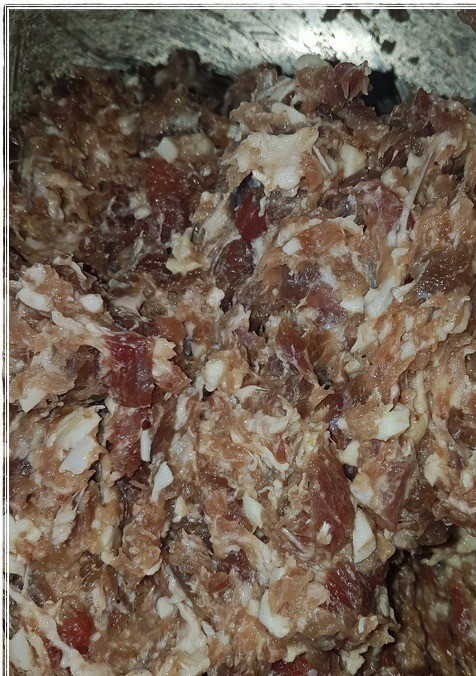 What was it like in the silent movies? It's been twenty hours.... We stuff sausages with this wonderful device. It's quick, convenient, and gets a tight, even stuffing. I recommend it to everyone. It's worth having in the kitchen.

Here. And then we hang the sausages, at least overnight, at room temperature. 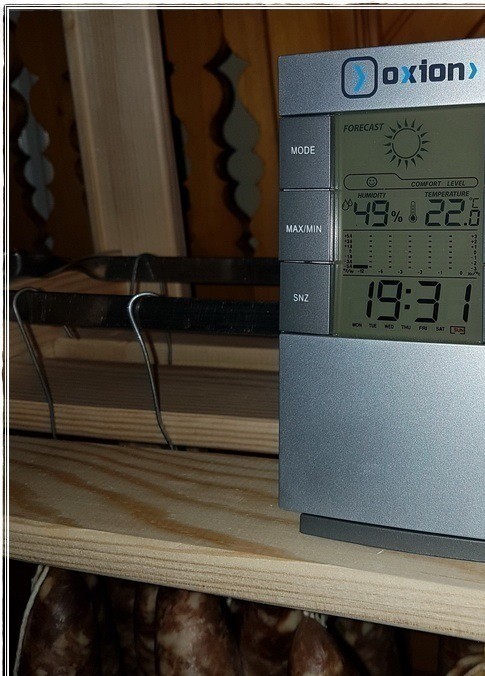 So that, then, it's flattened, sagged, and a little dried out. 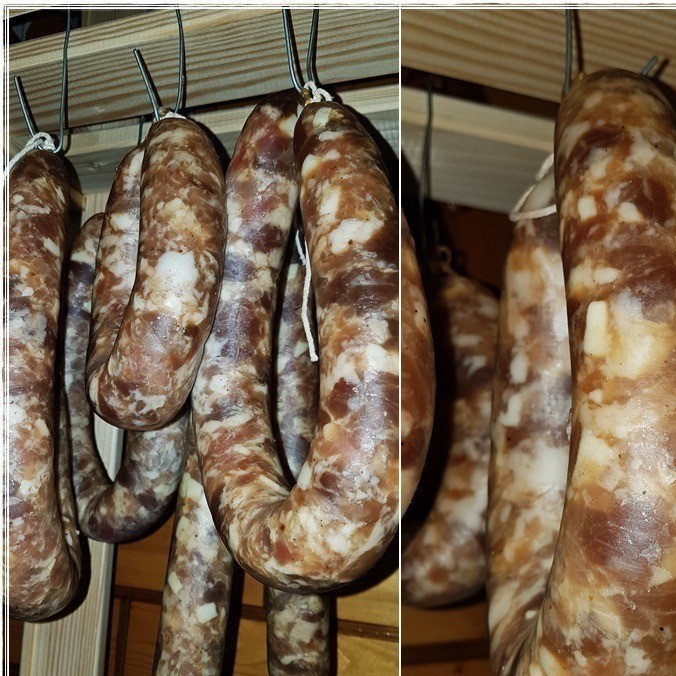 And then comes, the next morning, the heat treatment stage. It involves three steps. Drying, so to speak. Lay out the sausages on a rack (if you have the opportunity - it's better to hang them in the oven). About the temperature of the oven I will tell, but about the time..., about the time - no. See the photo on the right of the sausage sticking out a probe? Without such a thermometer it will be very difficult to get it right. It costs a pretty penny and is sold everywhere. Buy it for sure, you won't regret it one bit. 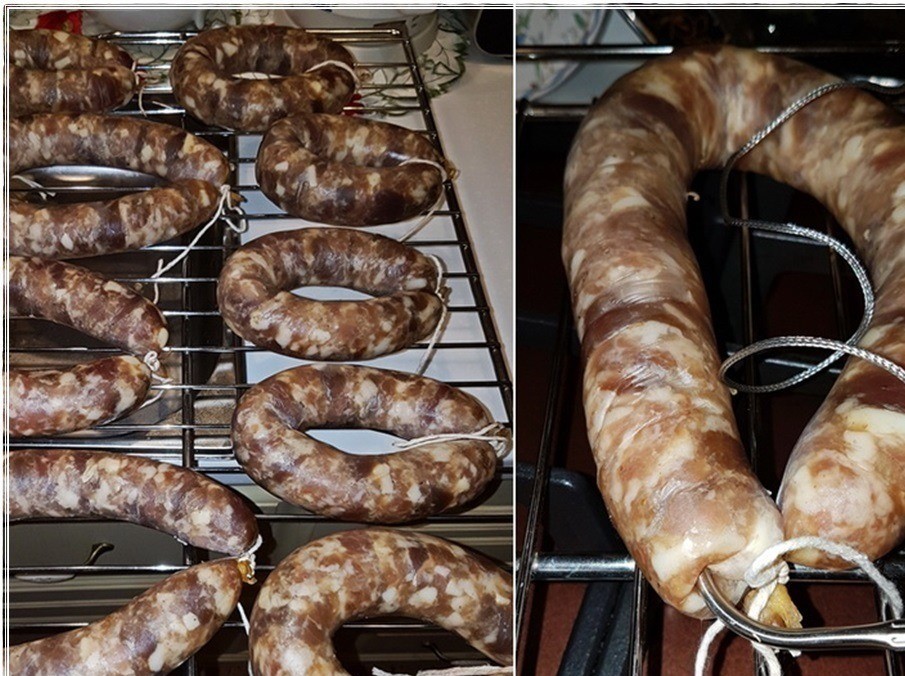 So, the first step. You dry the sausage at an oven temperature of 60 degrees, until the inside of the loaves, or rather baby carriages, of sausage reaches 47 degrees. 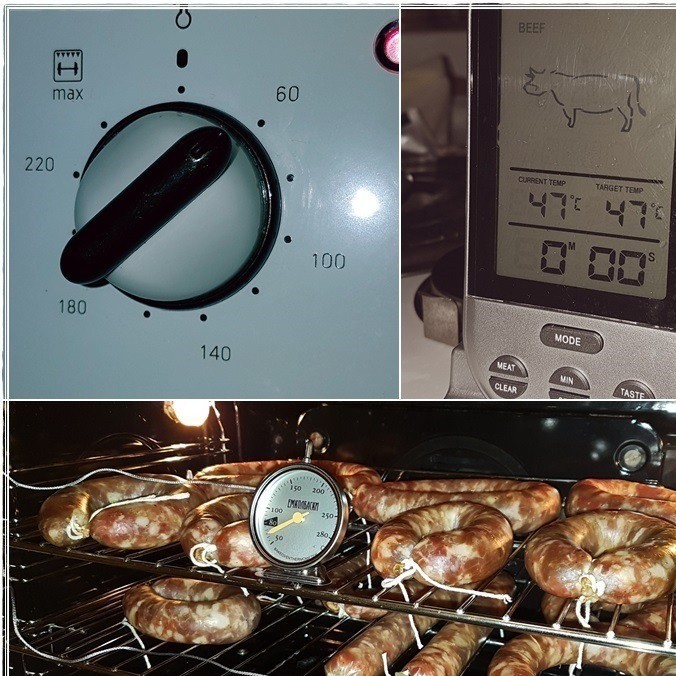 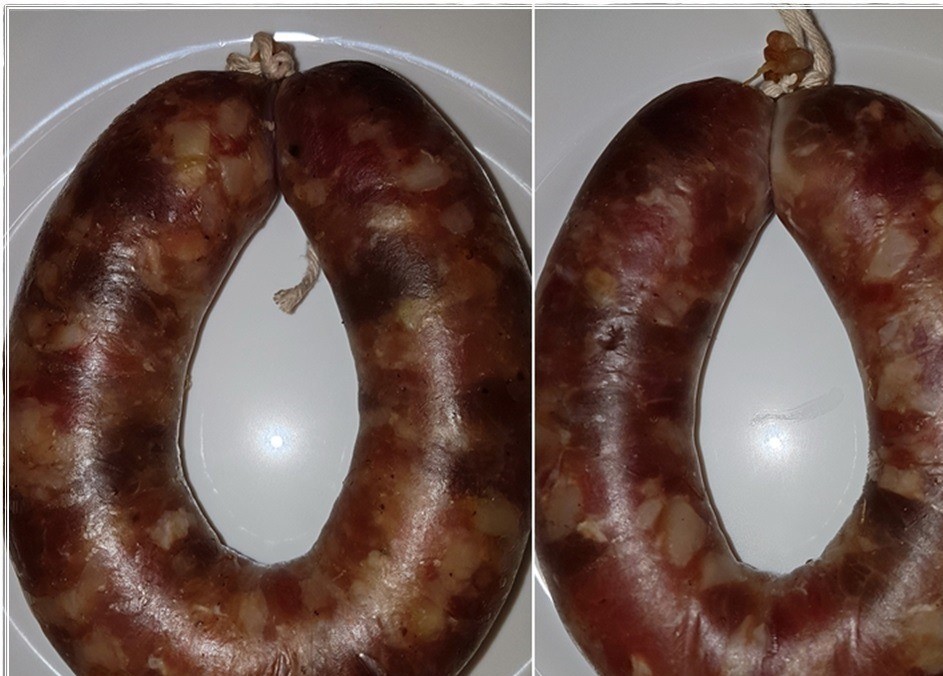 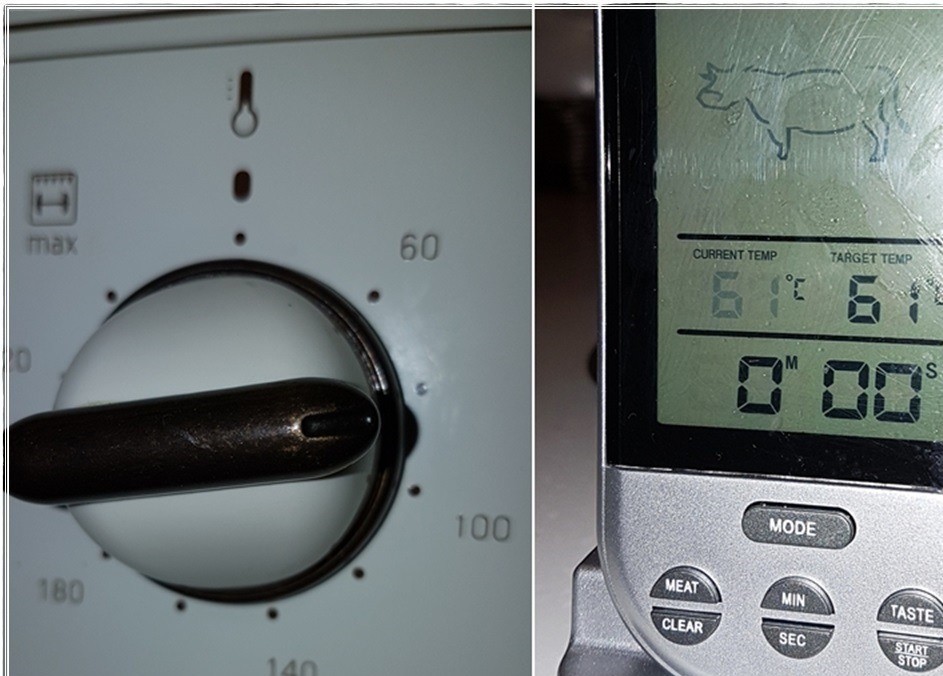 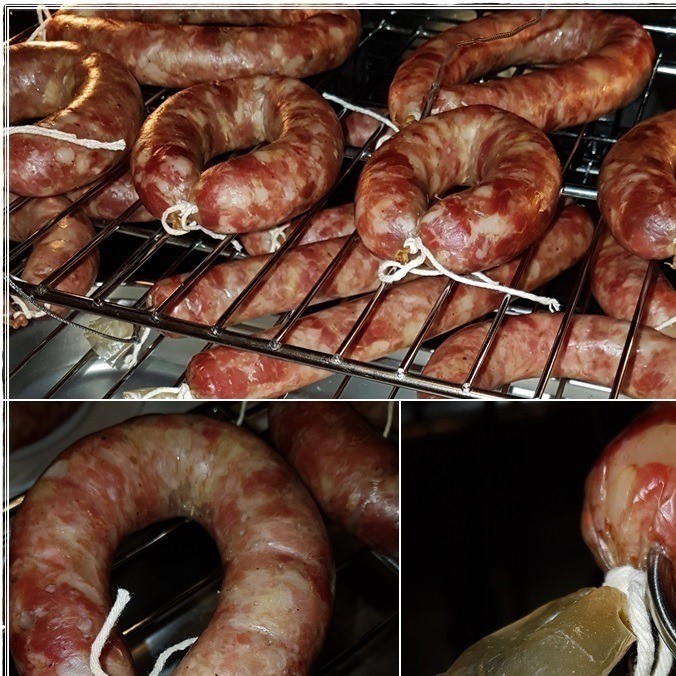 And the third step. Boil. Steaming. Put a tray of water under the sausage. Pour boiling water at once, so as not to lose time. The temperature in the oven is the same as the frying. We have to reach 70 to 75 degrees inside the sausage. 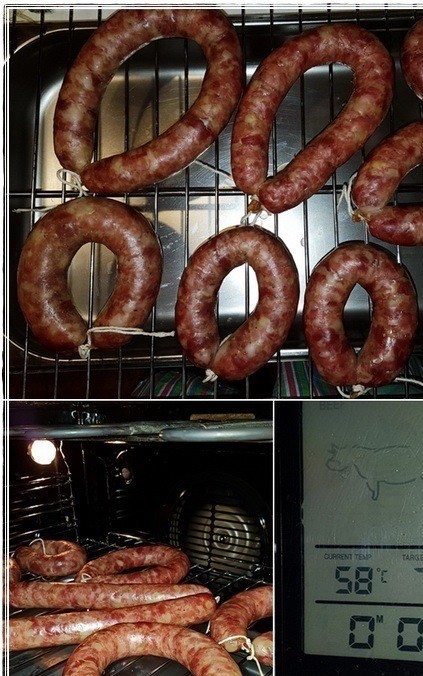 I mean, the heat treatment is finished. 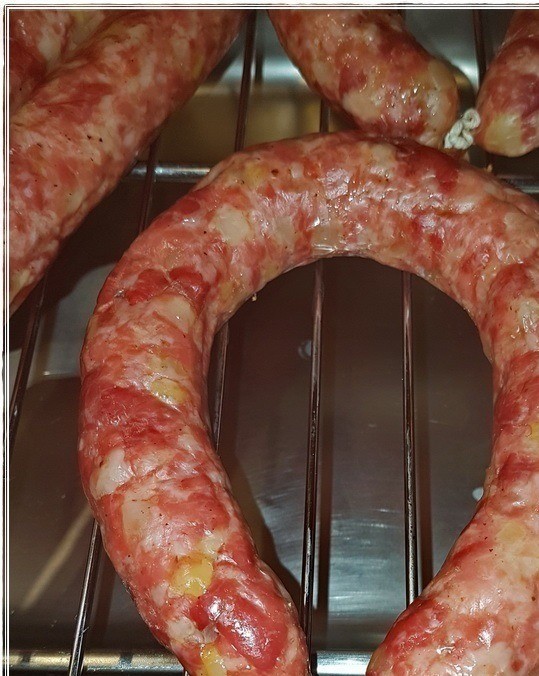 Overnight the sausage at room temperature, but not higher than 22 - x, suspended. And preferably in a light breeze. 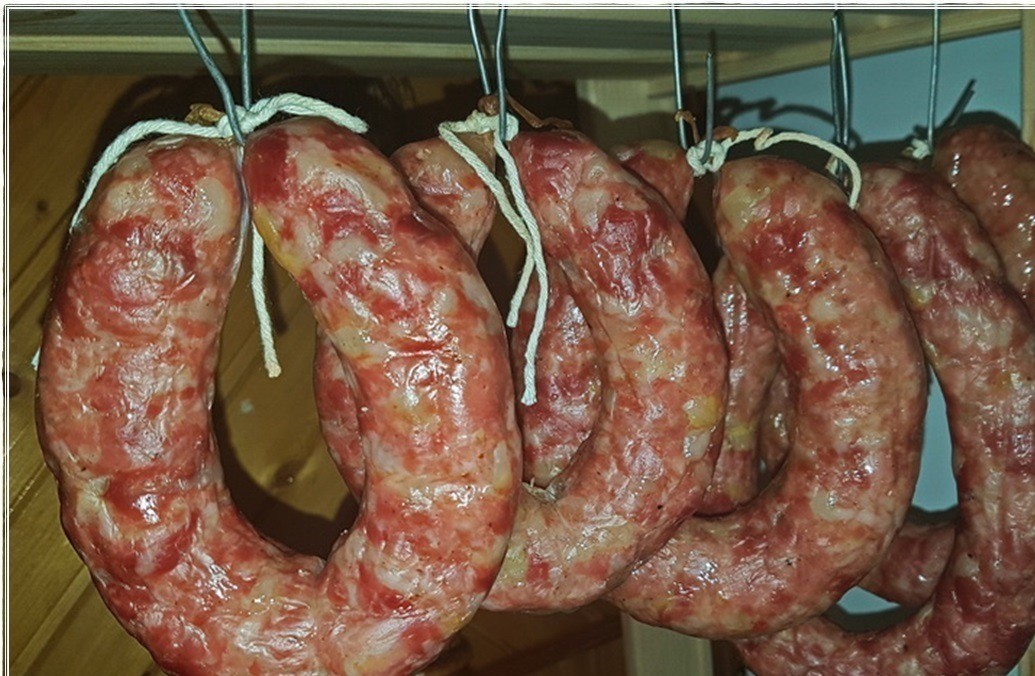 But, back to the tail again. It's dry. So everything went according to plan, according to acknowledged sausage authorities. 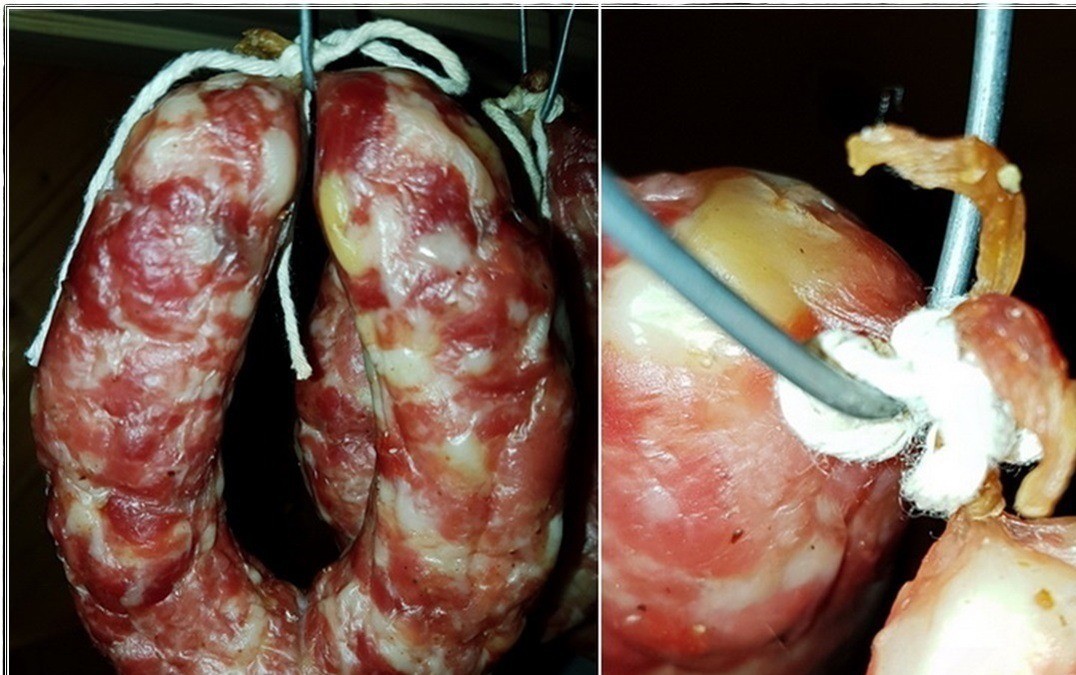 That's the kind of look that formed. The aroma is still pungent. The sausage itself is not hot at all, ambient temperature. 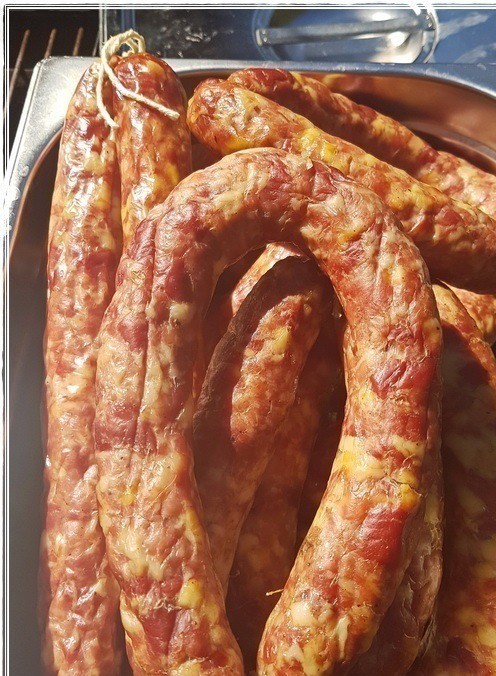 And then the sausage is sent to "walk". Six hours, at least, it needs to hang to air out the sharpness of the smoking. 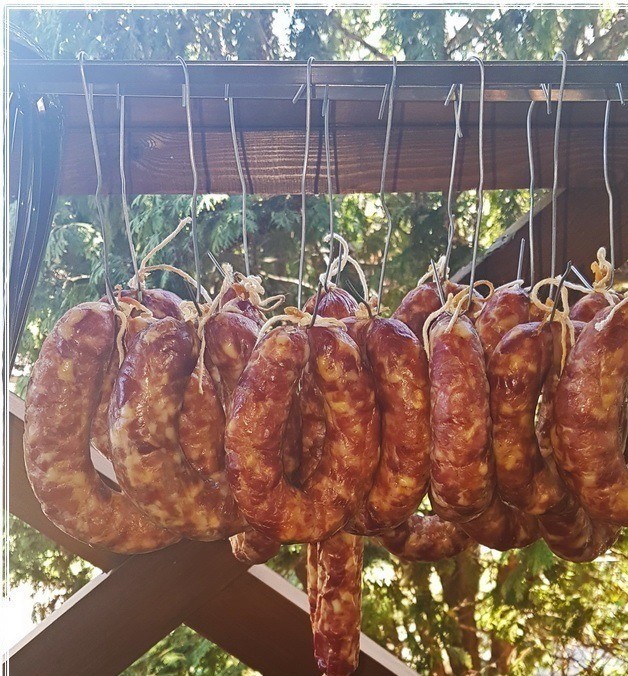 It's nice in the summer, a warm breeze and all sorts of other pleasures. But nobody cancelled flies, so put the product in a gauze bag - necessarily. 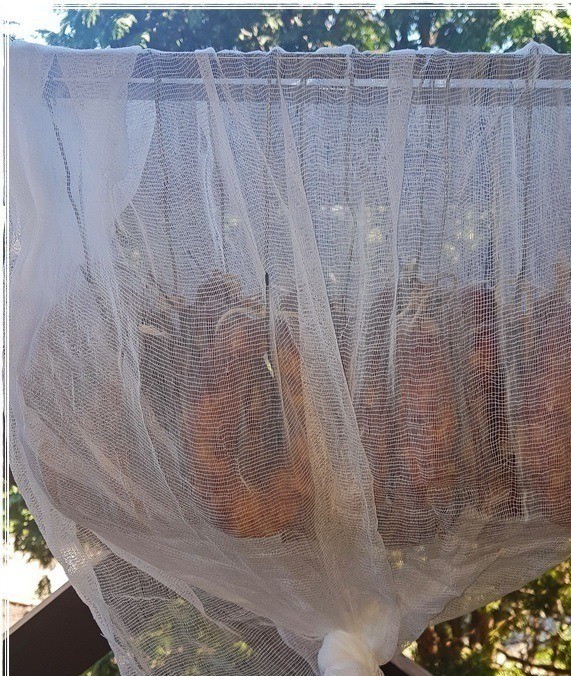 The sausage was aired for almost seven hours. 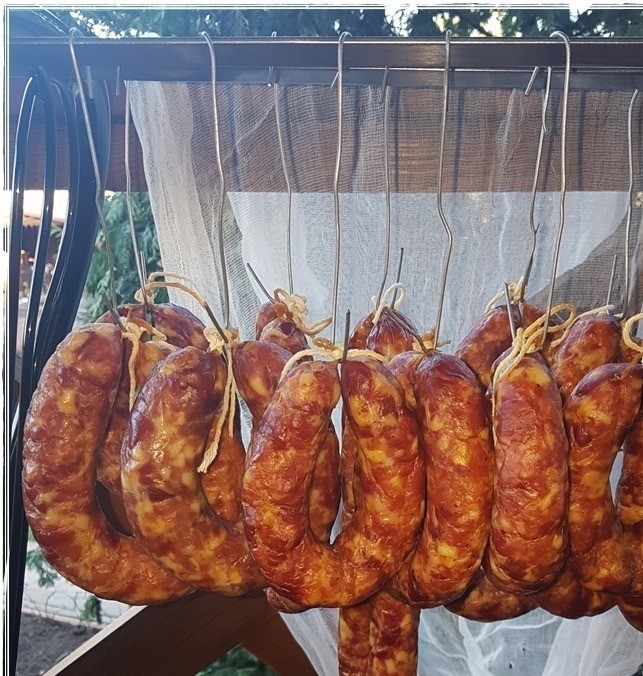 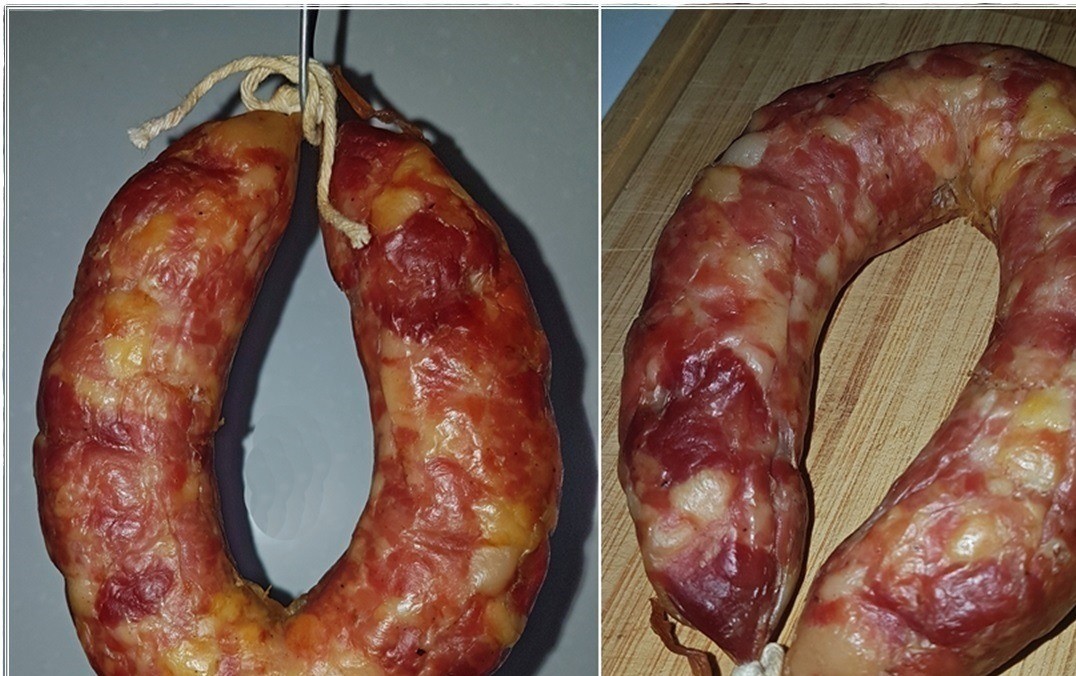 The pungent smoky smell is gone, or rather dissolved inside the product. Only a slight hint remains, an unobtrusive note. But, I should point out that the sausage is not quite ready yet. It still has to spend the night in the fridge, to collect the inner fatty juice "in the fist". Although, the little stroller, opened "to try", flew away in a jiffy. Angel to you at the meal! 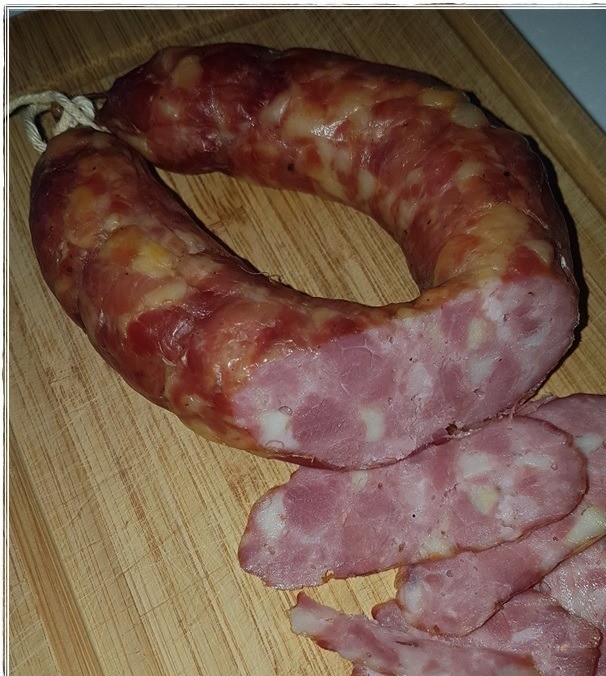